They are also VODcasting (video podcasting).

Since they are affiliated with a national TV network it only makes sense that they are in the Web 2.0 space – but it’s great to see a local TV station involved just the same. Edmonton is about two hours to the north of us here in Penhold. Red Deer, which is about fifteen minutes north of us also has a TV station – CH TV. They aren’t on Facebook and their video is a streaming feed from their website. CHCA is also part of the same large broadcast network – Canwest Global so maybe we will see them podcasting and taking part in social networking in the near future. 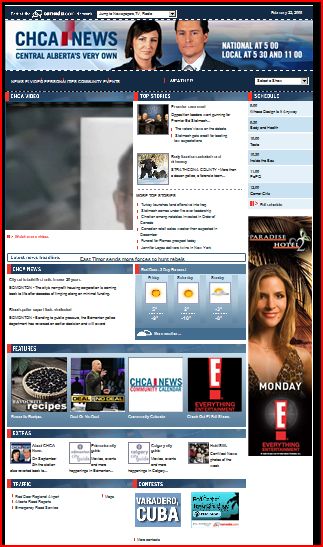 At first glance the Edmonton station’s Facebook page looks like a full blown advertisement for the station – lots of information on what they do, who they are and links to the shows in their line-up. There is a feedback area for folks to leave comments and opinions and videos. They tie this into their live broadcasts by reading viewers comments from “our Facebook page”. That’s how I heard about the Facebook page. They have 3,763 fans – which is a good number for any Facebook page. My initial opinion is that they are doing it – which is important. Are they doing it right? That’s up to the Facebook community to decide – which is the magic and power of web two OH!

So, are they doing it right or is it a Meatball Sundae (Seth Godin)? Check it out and let me know what you think.