BNN posted a blurb that CTV sold 3 TV stations to Shaw Cable for $3.00 and I almost spilled my morning coffee as I read what at first thought was an error. When it came up a second time I rushed to my computer to Google it. And there it was – 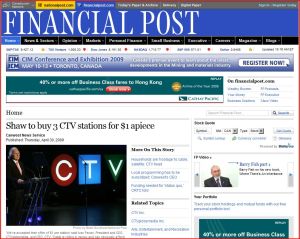 Canadian broadcasters and cable providers are currently slinging mud at each other in the recent rounds of CRTC hearings. Some of this came out in the press releases for this $3.00 deal:

“I think it’s great,” (CTVglobemedia Inc. chief executive officer Ivan) Fecan said. “We’ve accepted their offer of $1 per station. Cable is rolling in money and can obviously afford to underwrite the losses.”

Shaw chief executive officer Jim Shaw cited that small local stations can make money and used as an example their station in Kenora, Ontario. Then he went on to say something that shows innovation and future thinking (time will tell).

“Maybe it’s time that we look at TV different in Canada,” Shaw said. “There’s lots of bright people around in Canada, and because [the networks] can’t figure it out is not our issue.”

Shaw apparently made the same offer to CanWest Global of a $1.00 each  for their five E! network stations that are on the chopping block. At the time of the news releases CanWest Global had not responded to the offer. Red Deer has one of these stations and it would be great to see it taken over (even by Shaw Cable) versus the alternative of shutting down. The result could be more local content.

There is a trend in European newspapers to concentrate on small, local content focused publications. There is a money man (I couldn’t find anything about him on google – yet) who was reviving newspapers on the continent by changing their focus from world news to local coverage. So far it’s working and is successful. North American newspapers seem to be missing the point, but maybe Jim Shaw has the key to unlock the future of television in Canada by doing similar things with these small market stations.