Anyone who has followed my blogs or who talks to me for any length of time is aware of my feelings and passion for local television. Many times I have lamented the loss of local coverage on mainstream broadcast and cable networks. I’ve talked about it often enough and even suggested a few ideas to resolve the problem and publish or broadcast local news and information either via the web or on cable. For the past few years I was involved with a small market producer with the intent of featuring local news and events from our community as television. Initially this was via the web with the intent of also securing a channel on the local cable/IPTV network. After some time working on this project it occurred to me that their solution wasn’t necessarily what I had in mind. Duplicating traditional TV with long form, top of the hour programming wasn’t the solution I was looking for.

This past summer I spent some time evaluating the need for local community television in our town and region. Also in the mix was determining how to leverage the local high-speed broadband and IPTV network being installed in the town of Olds. I developed about a half a dozen models to take advantage of the opportunity to build a business on the O-Net broadband network. There were two businesses that came out of this visioning. Olds Community TV is the one we are currently working on.

Unlike traditional television, Olds Community TV is a channel featuring a multi-media view on the full lean-back screen. 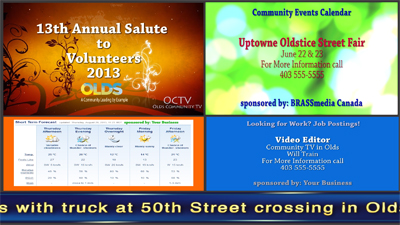 Featuring short-from live video segments anywhere from three to ten minutes long this channel serves up local/hyperlocal news and information from Mountain View County (local) and the town of Olds (hyper-local). In my initial market research phase where I have presented my concept of Olds Community TV to various groups in the community, the feedback has been positive. After reviewing the results of discussions, comments and suggestions on what the community would like to see and how they would like to access the channel’s content, we are ready to move forward with Olds Community TV – the goto location for news and information from Olds and Mountain View County.

Check out our website at www.OCTV.ca for a sample of what we are proposing. A mock-up of the channel is here. Oh… and take our survey here.